You can find the source article HERE.

Comments Off on Publications

Kahwah (Urdu: قہوہ‎, also transliterated qehwa, kehwa or kahwa) is a traditional green tea preparation consumed in Afghanistan, northern Pakistan, some regions of Central Asia as well as the Kashmir Valley. In Pakistan, it is made in the Khyber Pakhtunkhwa and Gilgit-Baltistan regions. It is a popular breakfast beverage among Kashmiris, generally accompanied with special Kashmiri baked items like girda. Kashmiri Pandit migrants living in the North Indian plains, particularly in the urban agglomeration of Delhi, have also contributed to the tea’s popularity among non-Kashmiris.

The tea is made by boiling green tea leaves with saffron strands, cinnamon bark, cardamom pods and occasionally Kashmiri roses to add a great aroma. Generally, it is served with sugar or honey and crushed nuts, usually almonds or walnuts. Some varieties are made as an herbal infusion only, without the green tea leaves. Kahwah is usually served to guests or as part of a celebration dinner, and saffron (kong) is added to the kahwah for special visitors. 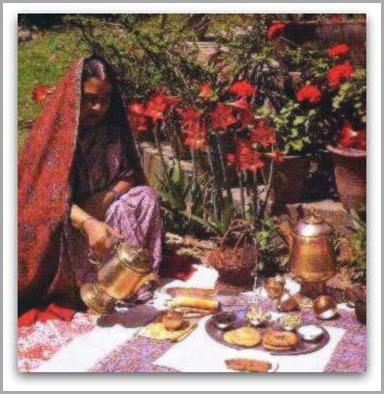 Ingredients:
Kashmiri Green Tea (Kahva) – 5 tsp
Saffron – 5 pinches
Cardamoms – 2, slightly crushed
Almonds – 8, chopped
Cinnamon Stick – 1
Clove – 1
Sugar or Honey – 2 tblsp
Method:
1. Boil 3 cups of water along with cinnamon, cardamom and cloves.
2. Add in the Kahva.
3. Let it simmer in low flame for 10 minutes.
4. Meanwhile, dissolve saffron in a teaspoon of water.
5. Strain the tea and add the saffron liquid together with crushed almonds.
6. Sweeten with sugar or honey as required to taste.

This work is licensed under a Creative Commons Attribution Non-commercial No Derivatives license.

A short note on Indian Cuisine.

The Indian cuisine boasts of an immense variety not restricted to only curry. An authentic Indian curry is an intricate combination of a stir-fried Masala – a mixture of onion, garlic, ginger, and tomatoes; various spices and seasonings with which meat; poultry, vegetables or fish is prepared to produce a stew-type dish. [Note: the word Masala also means spice.]

Food in India is wide ranging in variety, taste and flavor. Being so diverse geographically, each region has its own cuisine and style of preparation. Indian cuisine, renowned for its exotic gravies seems complicated for any newcomer. The Mughlai cuisine of North differs sharply from the preparations of the south. The Wazwan style of Kashmir is luxurious but the same can be said about Bengal’s Macher Jhol, Rajasthan’s Dal Bati, Uttar Pradesh’s Kebabs and Punjab’s Sarson Ka Saag and Makki di Roti. In India, recipes are handed down from generation to generation.

The unique and strong flavours in Indian cuisine are derived from spices, seasonings and nutritious ingredients such as leafy vegetables, grains, fruits, and legumes. Most of the spices used in Indian cooking were originally chosen thousands of years ago for their medicinal qualities and not for flavor. Many of them such as turmeric, cloves and cardamoms are very antiseptic, others like ginger, are carminative and good for the digestion. All curries are made using a wide variety of spices.

In Indian cuisine, food is categorized into six tastes – sweet, sour, salty, spicy, bitter and astringent. A well-balanced Indian meal contains all six tastes, not always can this be accomplished. This principle explains the use of numerous spice combinations and depth of flavor in Indian recipes. Side dishes and condiments like chutneys, curries, daals and Indian pickles contribute to and add to the overall flavor and texture of a meal and provide balance needed.

This work is licensed under a Creative Commons Attribution Non-commercial No Derivatives license.